The Air We Breathe

“Changes in the climate affect the air we breathe both indoors and outdoors. Warmer temperatures and shifting weather patterns can worsen air quality, which can lead to asthma attacks and other respiratory and cardiovascular health effects.” (EPA website) Specific to Arizona and the Southwest, we have another airborne threat. Our extreme climate turns out to be extremely hospitable to the Coccidiodes fungus, the agent that causes Valley Fever. The general public, and especially construction workers, landscapers, and builders are exposed to this fungus daily and without warning.

Valley Fever is a systemic infection. Victims are exposed by breathing in fungal spores, often after a period of high winds. Not 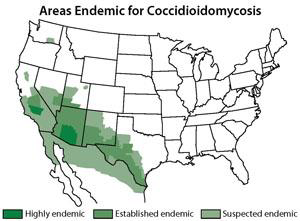 everyone who is exposed develops the disease. Many report flu-like symptoms, including fever, cough, headaches, muscle aches, and fatigue. In other cases, Valley Fever causes serious lung infections, pneumonia, and even death.

Arizonans Are at Great Risk
In the Southwest, the Coccidiodes fungus is soil-dwelling. This map shows the native, or “endemic” areas where Coccidiodes is located. The highest concentration is in Arizona, which had twice as many cases of Valley Fever in 2012 than any other state. 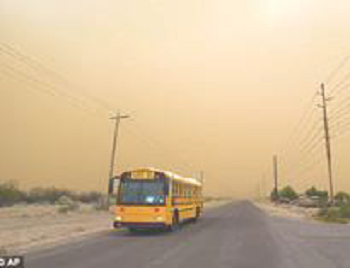 For our school children – especially those with allergies and
asthma, protecting them from an airborne danger is difficult.
More school districts are considering misting for walkways and
play areas.
Senior citizens in Arizona often have difficulty breathing. As
we grow older our immune systems may become weaker;
we may have greater sensitivity to heat and airborne
contaminants; or we may have preexisting medical conditions.
Even our pets are susceptible and have been known to die
from Valley Fever.

According to the CDC website, almost 75% of Valley Fever victims miss work or school, and up to 40% must be hospitalized. For large-scale contractors and builders, this presents a severe risk to their business and employees. For schools this means lower attendance.

The Pros and Cons of a Dry Climate 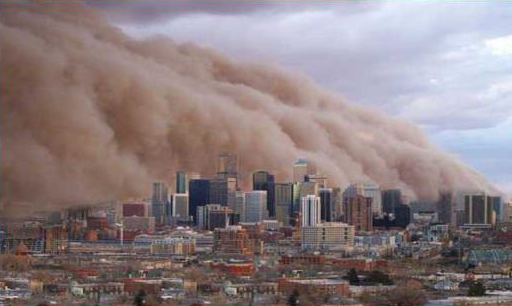 Living in the desert has special challenges and advantages. Our dry climate makes the 105-degree summer temperature tolerable, and provides us with long seasons to enjoy our beautiful outdoors. However, Phoenix and Tucson areas have a humidity rating of approximately 14 percent, while Yuma can average 3 percent – the lowest in our nation. Natural healthy humidity rating for humans, pets, and livestock should be greater than 40 per cent. (Mercola.com)